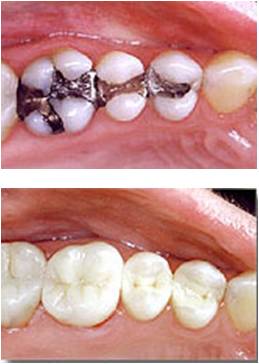 Most people recognize dental amalgams as silver fillings – which have been used commonly for many years by dentists all over the world. However, silver fillings contain a lot more than just silver. They also have about 50% mercury as well as other metals such as tin, copper and zinc.

How Safe is Mercury/Silver Amalgam?

Millions of people today have amalgam fillings; however, in recent years, concerns have been raised about the use of amalgam in dentistry because of the mercury. There are some studies that have concluded that amalgam fillings are perfectly safe, while other studies have shown that very small amounts of mercury in the form of vapor can be released during chewing or as the filling wears. Dr. Macalik understands that many patients are concerned about this and has chosen to practice mercury-free – without the use of amalgam when filling cavities.

Why We Prefer White Fillings over Amalgam Fillings

Dr. Macalik has taken the time to master the skill needed to place white composite fillings. Not only do they look more aesthetically pleasing than amalgam fillings, they have several other advantages:

Want to find out more about mercury-free fillings? Call our office or schedule an appointment online with Dr. Macalik so you can ask any questions you may have.